In 2007 a group of doctors from the Centre for Altitude Space and Extreme Environment (CASE) medicine took direct measurements of arterial oxygen concentration from 8400m – just below the summit of Mount Everest, the highest point on earth. With values as low as just 2.55kPa, these results were the lowest PaO2 levels ever recorded in a living human and much lower than many critically ill patients in intensive care. Yet these incredibly low oxygen levels were still sufficient to successfully climb Mount Everest, whilst remaining alert and orientated enough to take femoral arterial blood samples from each other with no complications.

There is increasingly strong evidence that coping with the stress of hypoxia at altitude is identical to the stress of coping with hypoxia when critically ill, and it is almost impossible to think of a hospital patient who isn’t suffering from hypoxia. For this reason, the team returned to Nepal this year as part of the Xtreme Everest 2 medical research expedition to test themselves and over 200 healthy volunteers in an attempt to increase our understanding about the effects of hypoxia. This was the largest medical research expedition ever conducted at altitude, ultimately hoping to find new ways to treat hypoxic patients in hospital. I was lucky enough to go on this expedition as one of the investigators and take part in this research myself. 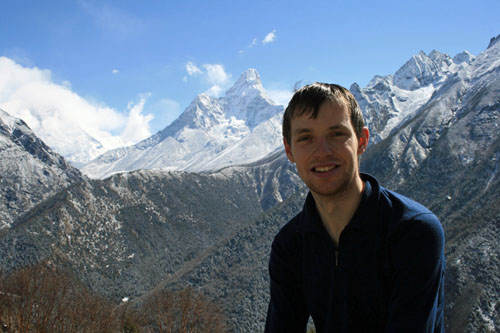 Figure 1 Andrew in the Khumbu region of Nepal

Volunteers were all tested at sea level in London before flying out to Nepal and completing the Everest base camp trek. Identical twins took part, as well as Western trekkers from the age of 7 through to over 80. Uniquely we also tested around 80 Sherpas – high altitude dwellers native to the Everest region of Nepal, known as the Khumbu.

Trekkers/subjects completed the trek to Everest Base Camp in groups of about 15, being tested at different stages of the trek as they climbed. Some had already completed the trek on the previous 2007 expedition but many had never been to Nepal or to high altitude before.

The trek started with a scary plane landing at Lukla airport. The short steeply sloped runway has a sheer cliff at one end and high wall at the other, making it one of the most dangerous airports in the world! From there everyone spent 10 days gradually climbing through small Sherpa villages to reach the Khumbu ice fall at the foot of Mount Everest, where a small collection of tents makes up Everest Base Camp. The air gets increasingly thinner each day up to base camp (5300m), where there is only about half as much oxygen available in the air as there is at sea level. 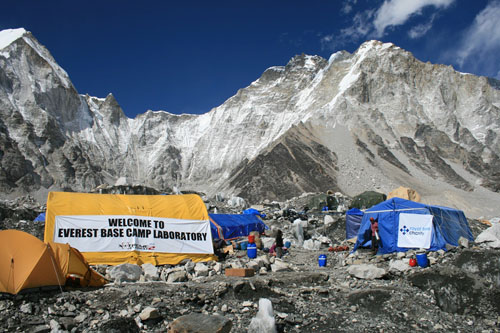 We performed over 60 different research studies at 3 different laboratories: in Kathmandu, at Namche Bazar (3500m) and Everest Base Camp itself. Tests included: blood tests, spirometry and other breathing tests, saliva sampling, urine sampling, microcirculatory measurements, nitrate studies and thoracic ultrasounds amongst others. Everyone completed a daily diary listing their symptoms from the Lake Louise Score for Acute Mountain Sickness and also measuring their vital signs. We also had exercise bikes at each laboratory and performed a range of different cardiopulmonary exercise tests on everyone.

All of the investigator team were also tested, often having extra tests that were not carried out on the volunteer trekkers such as invasive muscle biopsies. 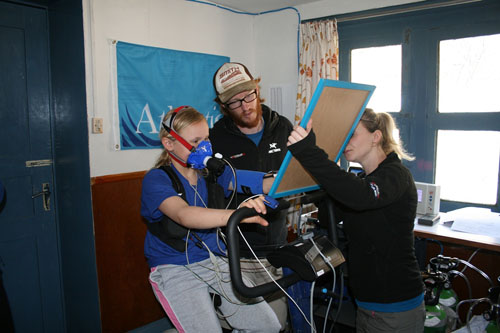 Life in the Khumbu

I spent most of the expedition running cardiopulmonary exercise tests at Namche Bazar (3500m), before going up to Everest Base Camp at the end of trip. During the 3 months in Nepal we saw temperatures gradually rise from -30°C at night in March, to plus 30°C during the middle of the day at the end of May!

We stayed in basic lodges or tents each night. Food supplies are very limited too due to the little that can survive and grow at the altitude – anything else has to be physically carried up the trail from Kathmandu. Most meals would consists of potatoes, pasta and bread and Namche lived off the same 3 day rolling menu for the full 3 months. Despite all of these carbohydrates however, most of the investigators still lost weight each week!

There’s no mechanical transport once in the Khumbu region and the locals are used to walking for days to reach the nearest village to trade food. Trains of yaks and horses soon become familiar sights on the paths – and you quickly learn to get out of their way fast when you see them coming!

The Sherpa people themselves are incredible. They easily manage to porter huge loads up and down the mountain whilst all of us struggled along breathless behind them. 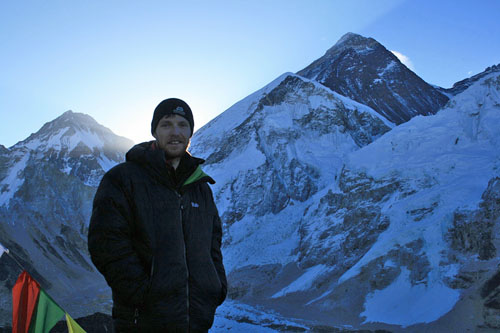 A container full of data and samples is now on its way to the UK from Kathmandu. The Namche lab alone collected over 4000 physical (e.g. blood/saliva/urine/tissue) samples during the expediton as well as thousands more electronic data points. Together with the data from the expeditions’s two other laboratories, it’s likely to take years to analyse all of this information completely. However the conclusions may completely change the way we treat our patients in hospital.

This was an amazing opportunity to take part in a truly unique medical research project. Living in the Khumbu for 3 months was an incredible privilege and many of the people I met and worked with on the expedition will remain life-long friends – particularly the incredible Sherpas who live and work in Namche Bazar. I now hope to stay involved with this project through the data processing and analysis phases – and hopefully it will lead me into other areas of critical care research as well.